Buying A Suit In Italy: Siena

Jordan and I had our second suit excursion in Siena. This medieval town was built around a central plaza in the 1300 hundreds and in modern times the buildings have been converted into shops. These shops surrounding the Campo have been turned into high class clothing boutiques for both men and women. The shop Boggi Milano is one of six owned by the Carapelli family, who started their suit business in Milan.

I have to be honest when I say that I had a hard time finding fault with this shop, which earned a 4 out of 5. Not only were we offered wine and cheese upon entering the shop, the owner himself waited on our every needs (we aren't special - it was siesta and everyone else was on break) from answering questions to helping with the fittings. His shop was elegant and stylish with all wooden furniture, lots of seating for guests, and wardrobes full of high quality suits. Paolo Carapelli took Jordan's measurements, making suggestions about styles and fabrics in perfect English.

Jordan had seen this shop on trips to Siena before and had been impressed with the ties and pocket squares that the mannequins had. He had chosen a double breasted suit made of a fine black fabric with pinstripes, but Paolo had him try on a number of suits, including the middle sample from this photo: 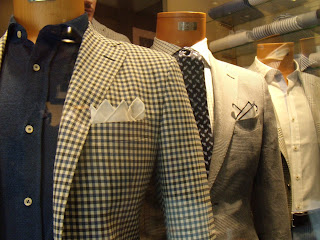 We appreciated Paolo's suggestions, but Jordan had his heart set on the pinstripe suit. Eventually the owner "allowed" him to try it on, but his demeanor changed from pleasant to standoffish. I can only guess that by not taking Paolo's suit advice his attitude turned cold. On the one hand, one suggestion that Jordan didn't ignore was he should "have a suit color that matches his hair color." I actually liked this advice, and thought it had a lot of merit because I like color symmetry. On the other, Paolo's advice was contrary to the suits that he wanted Jordan to try on and eventually buy. After much discussion between the two of us we figured out that the suit Jordan wanted was 200 euro. The suit Paolo was trying to sell us was 600.

The moral of this story is that a company can seem very good on the outside (fancy furniture and excellent wine) but once customer service is called into question, that is where I draw the line. Boggi Milano had a fantastic suit that Jordan wanted, but Paolo's hot-then-cold attitude completely lost him the sale.

I could brag about Tien Son's customer service, but it is difficult to explain how our practices differ from Boggi Milano's or any other companies. Basically, as a new customer, the best way to have a satisfactory customer service experience is to attend events like our Traveling Tailor (its coming up next week!) or order a suit from us.