Buying A Suit In Italy: Florence

Throughout my time in Italy I employed my boyfriend Jordan to help me investigate what buying a suit in Italy was really like. We randomly chose four cities and four stores in order to compare different dimensions of the buying experience such as customer service, style and fit of the suit, pricing, and so on. First up is Florence! Jordan and I explored the open air market on the look out for souvenirs and suits.

Marco's caught my eye because of the colorful display of ties in the center of his stall. His selection of textiles was impressive: scarves, ties, mens and womens clothing, and many different leather products. He had stylish looking suit jackets and pants, but no dress shirts, which I found odd considering the t-shirts he was selling.

When we said we were interested in buying a suit, Marco began to pull out jackets from underneath his stall  for our review. Marco asked us questions such as "What fabric do you like" or "Would you tell me how much you want to spend", which I found helpful. The problems began when we played ignorant of all things suit: fabric, color, style, etc. Marco became frustrated that we didn't know what we were looking for, muttering about "American tourists."

Although frustrated, Marco still took the time to have Jordan try on the jackets, explaining about the different Italian fabrics he could choose from. Although this information was appreciated, Marco's fabrics didn't look anything like the product book he was showing us. In fact, the suits looked sun bleached. This is a consequence of selling textiles in the Italian sun, and when I asked Marco if a new suit could be delivered to us in the US, he stated that we could get the pants (which he didn't have to let us try on, so they would need to be custom made) but would have to buy the jacket at his stall.

This didn't work for Jordan. He is a broad shouldered guy but fairly stocky, so none of Marco's jackets fit him properly. The largest jacket Marco had was: 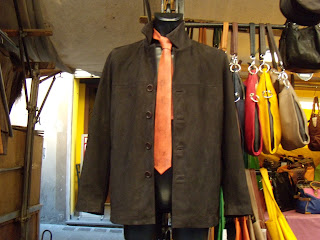 This is not a suit jacket, and having such a thin leather jacket would not work well for Jordan, who lives in Colorado. Marco insisted that this jacket would work well with brown suit pants and the orange tie (which I have to admit, is pretty stylish) but even this specimen didn't fit Jordan just right. We ended up purchasing a few of Marco's scarves in the end.

This experience was an eye opening one. Firstly, although Marco had nice products, we found out later that not all of the items sold in the open air market were made in Italy. Most of the ties displayed in the market were made in China (which is why the ties in the picture are only three euro: real Italian ties are more expensive!). Secondly, although Marco had a lot of information and helpful tips, he was not as willing to be patient with customers who didn't know what they wanted. Thirdly, Marco expected us to buy the jacket from him even though he was selling sun bleached textiles.

I would give Marco's stall  2 out of 5 stars. The experience was not as terrible as it could have been, and we did end up making nice purchases, but not did not find a suit that was up to either of our standards. Marco was a pleasant if impatient person, but did need to work on his customer service.

Next Monday's entry will be about our experiences in Siena with the owner of Boggi Milano. Make sure to sign up for our Traveling Tailor Event where we will be presenting our fabrics! One of the themes that I hope readers take away from my Buying A Suit In Italy series is that Tien Son is one of those companies that values our customer service above almost everything else. What definitely sets us apart from vendors like Marco is that even if you know nothing about what you want in a suit we are here to help. Come to our event to affirm this for yourself.